Class 6 English Grammar Chapter 6: The Noun – Case. It is that form of a noun or pronoun which shows its relation to the other words in a sentence. There are five cases: Nominative or Subjective Case, Objective Case, Dative Case, Vocative Case and Possessive Case. Read the following sentences: 1. Reena eats mangoes. 2. The teacher beats. 3. This is Reena’s pen. In the first sentence, Reena does some work. In the second sentence, the action of beating by the teacher completes with Reena. In the third sentence, the pen belongs to Reena. Reena has been used in different states. So the form of a Noun or Pronoun which denotes its relation with the other words in a sentence is called Case.

Explanation of Noun and its five Cases

When a Noun or Pronoun is used as a Subject of a Verb, it is said to be in the Nominative or Subjective Case. For example: 1. Akshay was a good boy. 2. The cow is a useful animal. 3. She lights a lamp. 4. The stone fell from above. In the above sentences, the words Akshay, The cow, She, The stone are the subjects of the verbs was, is, lights, and fell respectively. They are said to be in the Nominative or The Nominative Case in a sentence can be found by asking the question Who? Which? or What? to the verb. Who was a good boy? – Akshay. Which is a useful animal? – The Cow. Who lights a lamp? – She. What fell? – The stone. Hence Ram, She, The cow, The stone are in the (Nominative or Subjective Case)

Some verbs like—teach, tell, give, ask, offer, promise take two objects after them. One of these objects refers to some person (living); the other refers to some thing (non-living).
1. The teacher taught us English.
2. Mother gave the beggar a rupee.
In sentence 1, us and English are both objects of the verb taught. ‘Us’ is the Indirect Object and ‘English’ the Direct Object. In sentence 2, the beggar and a rupee are both objects of the verb gave. Beggar is the Indirect Object and rupee the Direct Object.

A noun in the Possessive Case is the possessor of the thing. He is Mohan’s father. This is Sita’s book. To find the possessive case put the question—whose? Whose father? – Mohan Whose book? – Sita. The Possessive Case does not always denote possession. It is used to denote
authorship, origin, kind etc.

FORMATION OF THE POSSESSIVE

The letter s is omitted in a few words where too many hissing sounds would come together; as, for conscience’ sake, for goodness’ sake, for justice’ sake, for Jesus’ sake, the Moses’ laws.

Download NCERT Books for session 2022-2023 and NCERT Solutions Offline Apps based on new CBSE Syllabus 2020. Ask your doubts related to NIOS or CBSE Board and share your knowledge with your friends and other users through Discussion Forum. 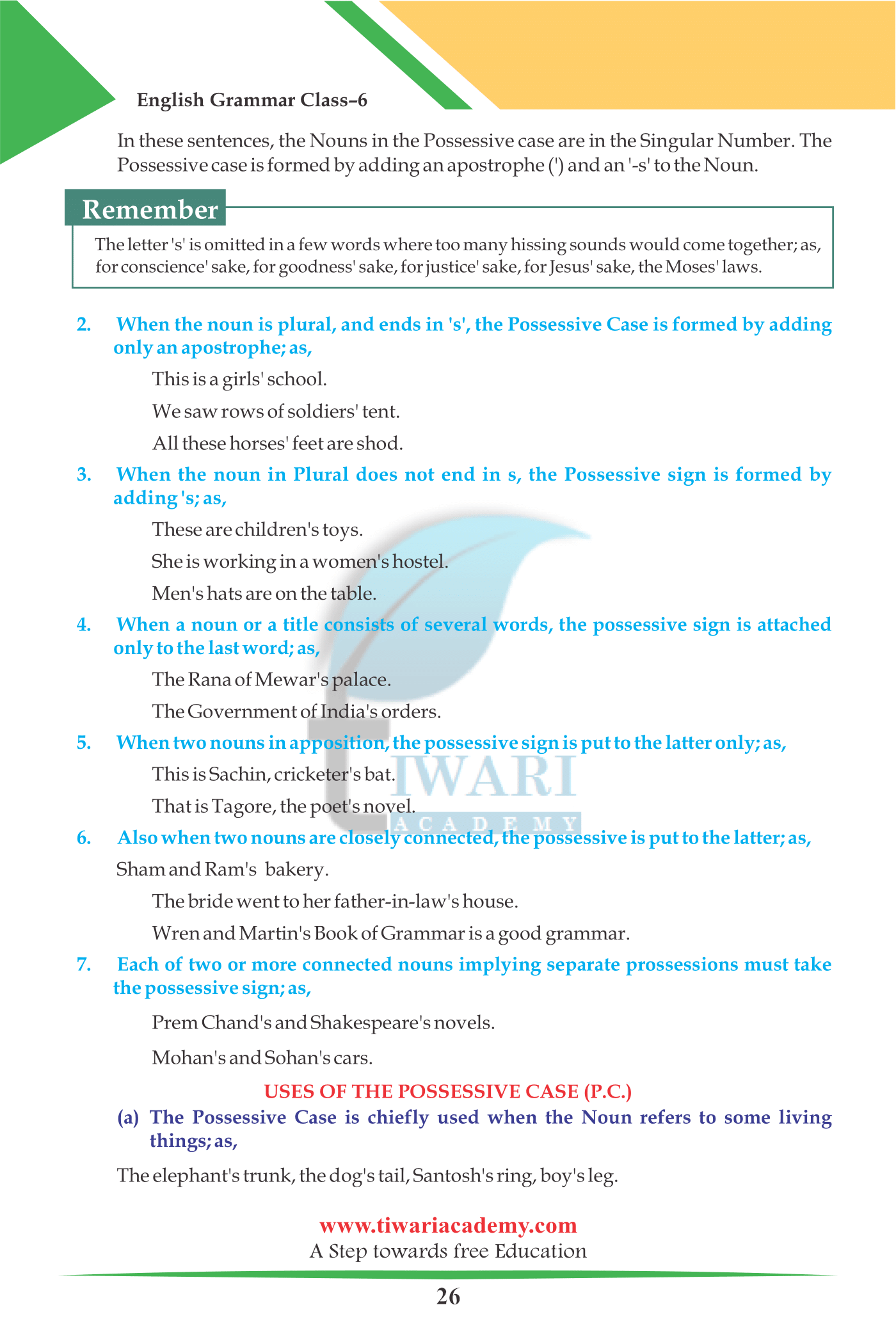