Download UP Board Solutions for Class 12 Physics Chapter 1, CBSE Offline Apps and NCERT Solutions 2022-23 based on latest CBSE Books for 2022-2023.

NCERT Solutions for Class 12 Physics Chapter 1 in PDF format are given below to free download updated for new academic session 2022-23. Join the Discussion Forum to ask your doubts related to CBSE or NIOS board. Download Offline Apps based on latest NCERT Books 2022-23 following the new CBSE Syllabus 2022-23.

1. Net capacitance of three identical capacitors connected in parallel is 12 microfarad. What will be the net capacitance when two of them are connected in (i) parallel (ii) series?
2. A charge Q is distributed over a metal sphere of radius R. What is the electric field and electric potential at the centre? Answer: E = 0, V = kQ/R.

4. An uncharged conductor A placed on an insulating stand is brought near a charged insulated conductor B. What happens to the charge and potential of B?
5. Why is the potentiometer preferred to a voltmeter for measuring emf of a cell?

1. In an uniform electric field of strength E, a charged particle Q moves point A to point B in the direction of the field and back from B to A. Calculate the ratio of the work done by the electric field in taking the charge particle from A to B and from B to A.

3. A copper wire of resistance R is uniformly stretched till its length is increased to n times its original length. What will be its new resistance?

5. An oil drop of mass m carrying charge –Q is to be held stationary in the gravitational field of the earth. What is the magnitude and direction of the electrostatic field required for this purpose? Answer: E = mg/Q, downward.

Explain the meaning of the statement ‘electric charge of a body is quantised’.

Electric charge of a body is quantized. This means that only integral (1, 2, …., n) number of electrons can be transferred from one body to the other. Charges are not transferred in fraction. Hence, a body possesses total charge only in integral multiples of electric charge.

Why can one ignore quantisation of electric charge when dealing with macroscopic i.e., large scale charges?

When a glass rod is rubbed with a silk cloth, charges appear on both. A similar phenomenon is observed with many other pairs of bodies. Explain how this observation is consistent with the law of conservation of charge.

Rubbing produces charges of equal magnitude but of opposite nature on the two bodies because charges are created in pairs. This phenomenon of charging is called charging by friction. The net charge on the system of two rubbed bodies is zero. This is because equal amount of opposite charges annihilate each other. When a glass rod is rubbed with a silk cloth, opposite nature charges appear on both the bodies. This phenomenon is in consistence with the law of conservation of energy. A similar phenomenon is observed with many other pairs of bodies.

An electrostatic field line is a continuous curve. That is, a field line cannot have sudden breaks. Why not?

Explain why two field lines never cross each other at any point?

What is the net flux of the uniform electric field of Exercise 1.15 through a cube of side 20 cm oriented so that its faces are parallel to the coordinate planes?

Verify this result for the simple configuration of two charges of the same magnitude and sign placed a certain distance apart.

Two charges of same magnitude and same sign are placed at a certain distance. The mid-point of the joining line of the charges is the null point. When a test charged is displaced along the line, it experiences a restoring force. If it is displaced normal to the joining line, then the net force takes it away from the null point. Hence, the charge is unstable because stability of equilibrium requires restoring force in all directions. 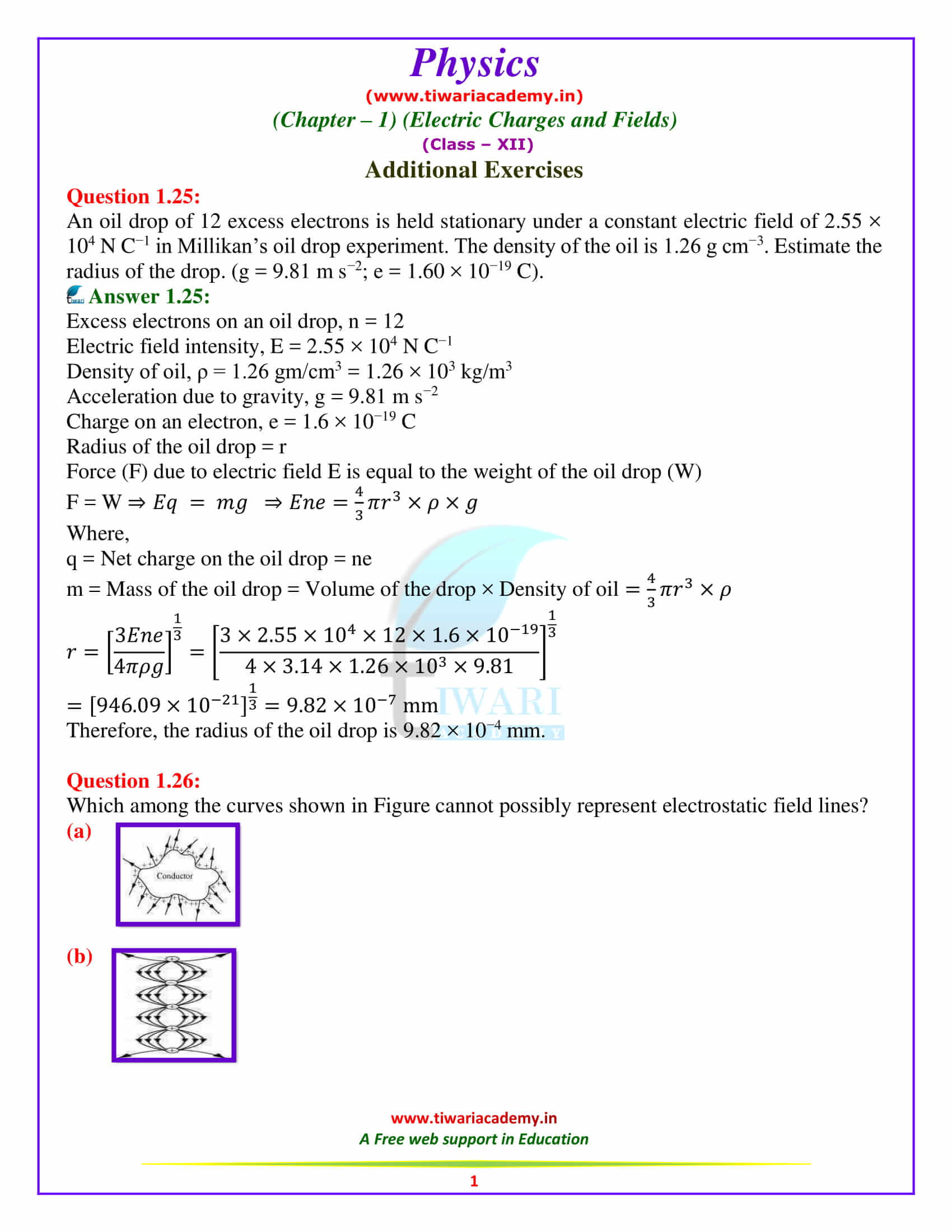