NCERT Solutions for Class 10 Economics Chapter 4 Globalisation and the Indian Economy in PDF form updated for new academic session 2022-23 based on latest CBSE Syllabus and following new NCERT Books for 2022-23. Download all digital contents, solutions, revision books, offline apps for offline use without internet. Ask your questions related to your syllabus and course in discussion forum.

NCERT Solutions for Class 10 Economics Chapter 4 in PDF form given below for download free. NCERT Solutions are updated for new academic session based on new NCERT Books and latest NCERT CBSE Syllabus.Visit to Discussion Forum and share your knowledge related to NIOS or CBSE Board.

What is meant by Globalisation?

Globalisation is a process of international integration arising from the interchange of world views, products, ideas and other aspects of a culture.

Liberalization refers to the reduction or elimination of government regulation or restrictions on private business and trade.

What is World Trade Organization?

What do you understand by Privatization?

Privatization is the transfer of a business, industry, or service from public to private ownership and control.

What is SEZ in special Economic zone of a country?

SEZ is a special economic zone of a country that is subject to unique economic regulations that differs from other areas in the same country. These regulations tend to be conductive to foreign direct investment.

How foreign trade leads to integration of markets?

Foreign trade creates an opportunity for the producer to reach beyond the domestic market. Goods can be imported to expand the choice of goods for consumers. Producers in two countries now closely compete against each other, prices tend to become equal.

How MNC’s interlink production across counties?

MNC’s set up production unit where it is close to the market where skilled unskilled labour is available at low cost, where government policies are favorable. They invest money called foreign investment and at times set up production jointly with local companies. They buy local companies and expand production. Place orders to small producers for products like Garments, footwear sports items etc.

What are the main purpose to liberalise international trade?

What are main Impacts of Globalisation?

What are Liberalisation of foreign trade and foreign investment policy?

Starting around 1991, barriers on foreign trade and foreign investments were removed to a large extent. It allowed foreign companies to set up factories and offices in India. Goods could be imported and exported easily.

Until middle of the 20th country, production was organised within countries but now Multinational corporations emerged. They own or control production in more than one nation. Multinational Corporation (MNC) is an enterprise operating in several countries but Managed from one country or group that derives a quarter of its revenue from operations outside of its home country.

Investment is the purchase of goods (such as machine, house, and other parts etc.) that are not consumed today but are used in the future to create wealth. Foreign Investment is when a company or individual from one nation invests in assets or ownership stakes of a company based in another nation.

1. Give one example of Trade Barriers?
2. When did India adopt the new economic policy?
3. Which sector of economy is still lagged behind even after the Globalization?
4. What is privatization?
5. In which category you will put Indian Economy?
6. When did Ford Motors established in India?
7. Removing barriers or restrictions set by govt. is called__________.
8. State the main motive of MNC?
9. Name the Indian manufacturer with which Ford Motors entered the Indian automobile business?
10. Which Indian company has been bought by Cargill foods and MNC?

1. Tax on Export
2. 1992
3. Agriculture Sector
4. Privatization means allowing the private sector to set up industries which were earlier reserved for the Public sector.

What do you understand by globalisation? Explain in your own words.

Globalisation is the process by which businesses or other organizations develop international influence or start operating on an international scale. Globalisation is integrating the economy of a country with the economies of other countries under conditions of free flow of trade, capital and movement of persons across borders. It involves interaction between people, companies, and governments across the world. Globalization has grown due to advances in transportation and communication technology. It includes Increase in foreign trade Export and import of new technology Flow of capital and finance from one country to another Migration of people from one country to another.

What was the reasons for putting barriers to foreign trade and foreign investment by the Indian government? Why did it wish to remove these barriers?

The Indian government had put barriers to foreign trade and foreign investment to protect the interest of domestic producers from foreign competition, especially when industries had just begun to come up in the 1950s and 1960s.The main at that point was to encourage markets within the country to flourish. Had the government allowed competition from imports, the growing industries would have suffered a blow. Hence, India allowed imports of only essential goods such as machinery, fertilizers, petroleum etc. In New Economic Policy in 1991, the government wished to remove these barriers because it felt that domestic producers were mature enough to compete with foreign industries. It felt that foreign competition would encourage local producers to improve the quality of goods produced by Indian industries. This decision was also supported by powerful international organisations. Now goods could be imported and exported easily and also foreign companies could set up factories and offices here.

How would flexibility in labour laws help companies?

Flexibility in labour laws will aid growth of companies by being competitive and progressive. By easing up on labour laws, company heads can negotiate wages and terminate employment, depending on market conditions. This will lead to an increase in the company’s competitiveness. The government has come up with flexible policies in labour laws to attract foreign investment. The government has allowed companies to ignore many of the labour laws. Instead of hiring workers on a regular basis, companies hire workers flexibly for short periods when there is intense pressure of work. This helps to reduce the cost of labour for the company and helps achieve desired profits.

What are the various ways in which MNCs set up, or control, production in other countries?

Multinational Corporations (MNCs) are coming up with factories or production units close to markets where they have easy availability of desired type of skilled or unskilled labour at low costs along with other factors of production. After ensuring these conditions MNCs set up production units in the following ways: i. MNCs are having tie-ups with local companies to capture large market share. ii. Acquire the local companies and then expand its production with the help of advances technology they possess. iii. They delegate orders to small producers and sell these products under their own brand name to the customers worldwide at a much higher price. iv. They get cheap labour to work for them in masses and produce large volumes to sell. v. Through the above ways, MNC’s are exerting a strong influence on production at distant locations.

“The impact of globalisation has not been uniform.” Explain this statement.

The impact of globalisation has not been uniform”. It has only worked in favour of skilled and professional person in urban areas and has not been of much benefit to the unskilled persons. The industrial and service sector has much gained in globalisation than in agriculture. Some have gained from successful tie-ups with foreign companies. It benefited MNCs on domestic producers and the industrial working class. The consumers, particularly the economically higher sections in the urban areas have gained advantage as they have wide variety to choose from and enjoy the improved quality at lower prices for several goods. Small producers of goods such as batteries, capacitors, plastics, toys, tyres, dairy products and vegetable oil have been hit hard by competition from cheaper imports.

How has liberalisation of trade and investment policies helped the globalisation process?

Liberalisation of trade and investment policies has helped the globalisation process by easing the process of foreign trade and investment. Earlier, various developing countries had their own set of barriers and restrictions on imports and investments from abroad to protect the interest of domestic production. However later on, the barrier had to be removed to promote improvement in the quality of domestic goods. Import duties have been reduced, measures are being taken to ease the flow of foreign capital into the country, entry of MNC’s and Foreign direct investment and foreign funds encouraged to flow in. Liberalization has given the power to make decisions of import and export in the hands of producers from all around the globe. This has led to a deeper integration of national economies into one conglomerate whole. It has also encouraged healthy competition among producers which has benefitted the consumer at large.

How does foreign trade lead to integration of markets across countries? Explain with an example other than those given here.

Foreign trade is an open opportunity for both producers and buyers to go beyond internal markets and reach global international markets. Goods travel from one country to another which generates healthy competition among producers of various countries as well as buyers across the world. Therefore, foreign trade leads to the integration of markets across countries. For example, the automobile industries in India have the option of importing cars from various car manufacturers. This provides an opportunity for the sellers to expand their business. With the liberalisation of foreign trade, electronic goods like digital cameras, laptop, smartphones have flooded the Indian market and give good opportunities to the buyer to select the item of their choice.

Globalisation will continue in the future. Can you imagine what the world would be like twenty years from now? Give reasons for your answer.

Twenty years down the line the world would undergo a positive change which will possess the following features— healthy competition, improved production efficiency, increased volume of output, income, and employment, better living standards, greater availability of information and modern technology. These are the favourable factors for globalisation: Availability of human resources both quantity wise and quality wise will increase. Broad resource and industrial base of major countries. Expansion of entrepreneurship. Expansion of domestic market. Expanding internal markets Economic liberalisations. Growing competition. 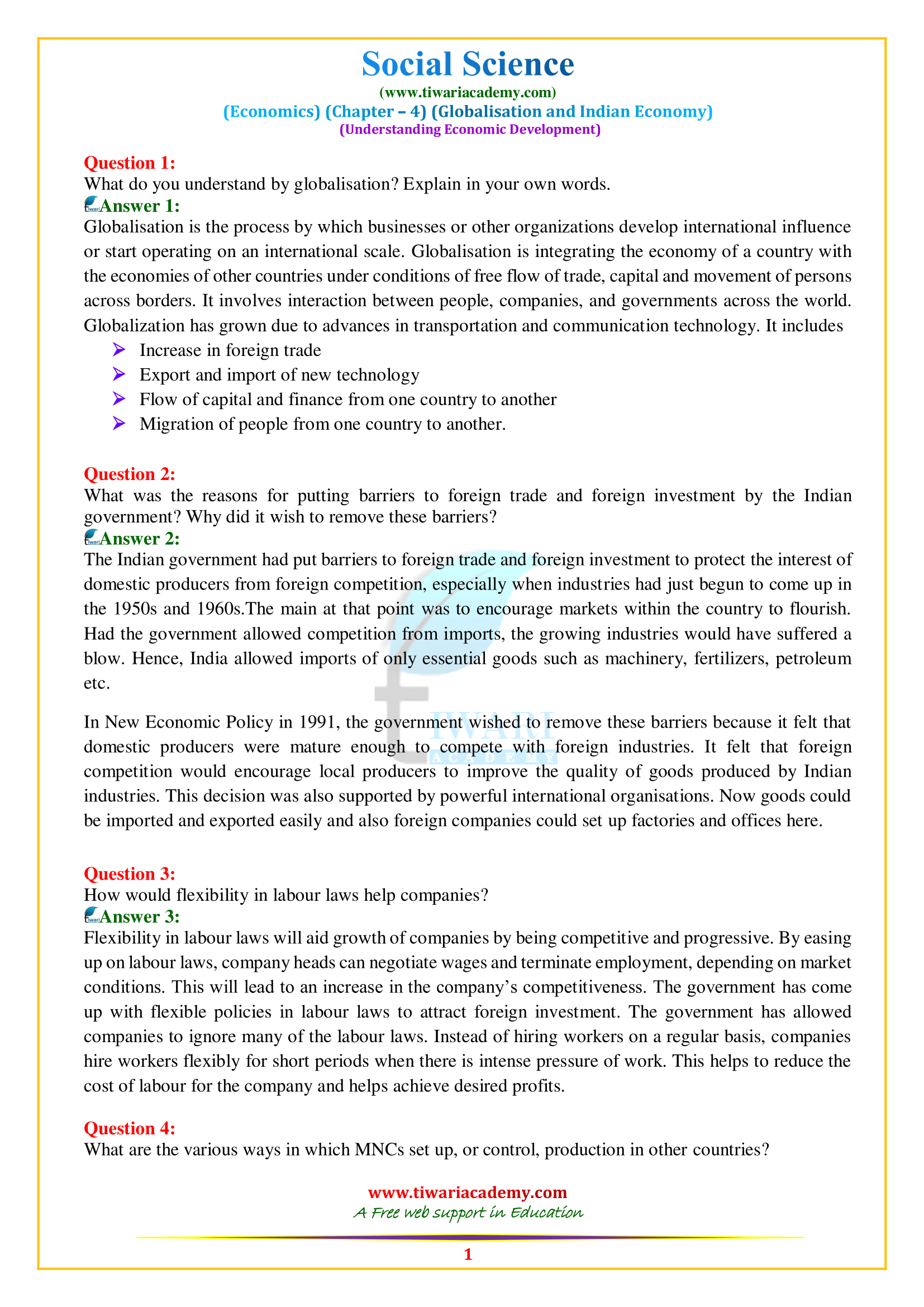