Hydrogen has the simplest atomic structure among all the elements around us in Nature. In atomic form it consists of only one proton and one electron. However, in elemental form it exists as a diatomic (H₂) molecule and is called dihydrogen.
Hydrogen, the most abundant element in the universe and the third most abundant on the surface of the globe, is being visualized as the major future source of energy.

Position of Hydrogen in The Periodic Table

Hydrogen resembles halogens in many respects for which several factors are responsible. Of the following factors which one is most important in this respect?

The tendency of hydrogen to gain a single electron in its valence shell to attain stable electronic configuration.

Why does H⁺ ion always get associated with other atoms or molecules?

[A]. Ionisation enthalpy of hydrogen resembles that of alkali metals.
[B]. Its reactivity is similar to halogens.
[C]. It resembles both alkali metals and halogens.
[D]. Loss of an electron from hydrogen atom results in a nucleus of very small size as compared to other atoms or ions. Due to small size it cannot exist free.
Answer: Option D
Explanation:

Hydrogen atom forms H⁺ ion by loss of electron. The size of H⁺ ion is 1.5 × 10⁻³ pm, which is extremely small as compared to normal atomic size and ionic sizes of 50 to 200 pm. Due to this reason, H⁺ ion does not exist freely and is always associated with other atoms or molecule.

Metal hydrides are ionic, covalent or molecular in nature. Among LiH, NaH, KH, RbH, CsH, the correct order of increasing ionic character is

Which of the following hydrides is electron-precise hydride?

Hydrogen has three isotopes: protium, ¹H₁, deuterium, ²H₁ or D and tritium, ³H₁ or T. These isotopes differ from one another in respect of the presence of neutrons. Ordinary hydrogen, protium, has no neutrons, deuterium (also known as heavy hydrogen) has one and tritium has two neutrons in the nucleus.

Radioactive elements emit α, β and γ rays and are characterised by their half-lives. The radioactive isotope of hydrogen is

The radioactive isotope of hydrogen is tritium.

Consider the reactions: (A) H₂O₂ + 2HI → I₂ + 2H₂O (B) HOCl + H₂O₂ → H₃O⁺ + Cl⁻ + O₂. Which of the following statements is correct about H₂O₂ with reference to these reactions? Hydrogen peroxide is

The oxide that gives H₂O₂ on treatment with dilute H₂SO₄ is

The oxide that gives H₂O₂ on treatment with dilute H₂SO₄ is BaO₂.8H₂O + O₂.

Hydrogen peroxide is both an oxidising and a reducing agent.

What do you understand by the term auto protolysis of water? What is its significance?

How is heavy water prepared? Compare its physical properties with those of ordinary water.

Explain why HCl is a gas and HF is a liquid. 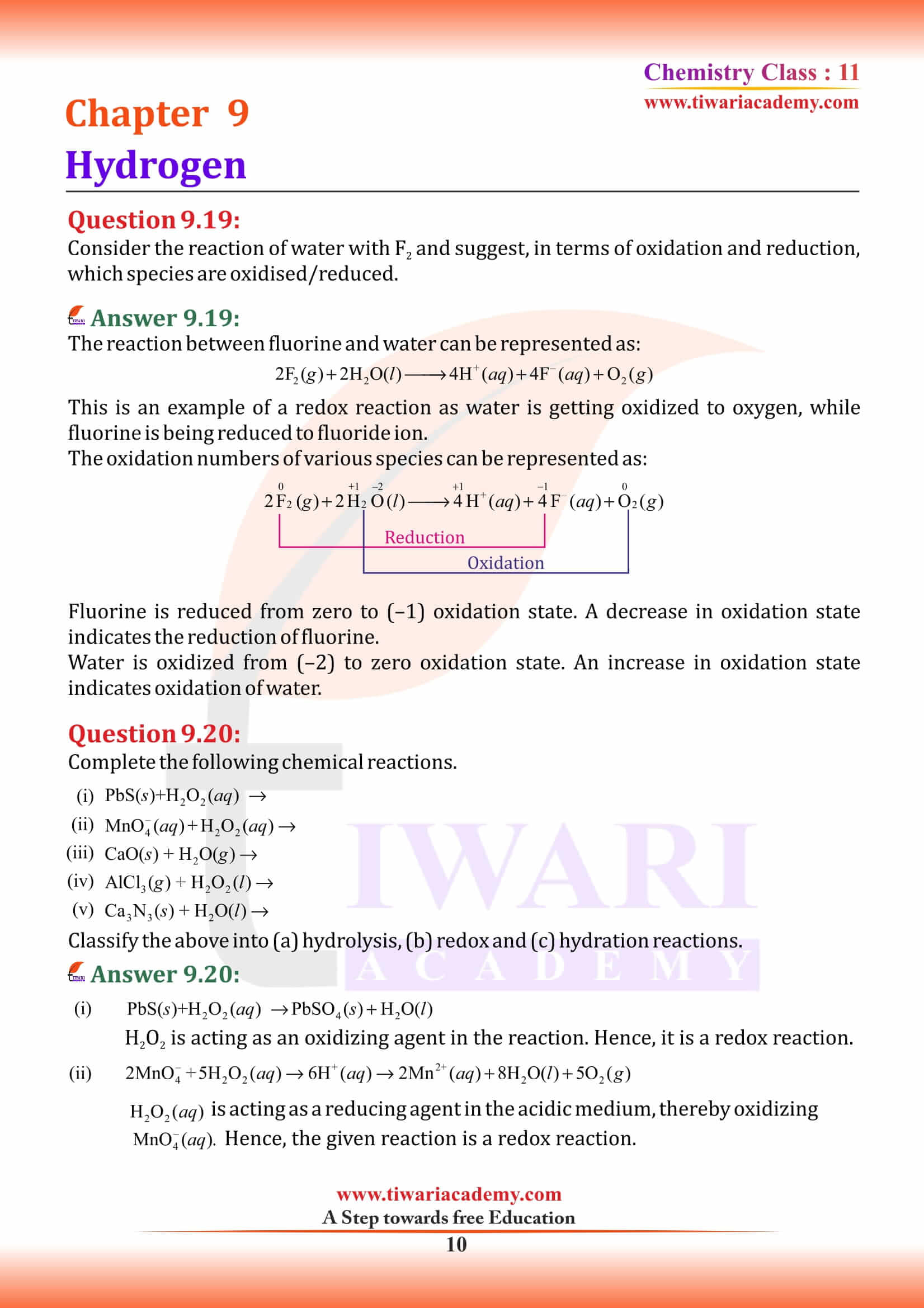