Class VI Mathematics NCERT book Ex. 4.6 of Basic Geometrical Ideas free to use online or download in PDF file format. Download the NCERT videos solution containing the explanation of each question of exercise 4.6 class 6 Maths. There is no need to login or registered to use Tiwari Academy contents. Feel free to contact us if have any problem using these contents and solutions.

The word ‘curve’ means ‘not straight’. However, in Mathematics a curve can be straight.

There are two types of curves:

A curve which does not cut itself is called an open curve.

A curve which cuts itself is called a closed curve.

Position of a Point with Respect to a Curve

If a closed curve is drawn on the plane of the paper, then it divides the plane into three disjoint parts: 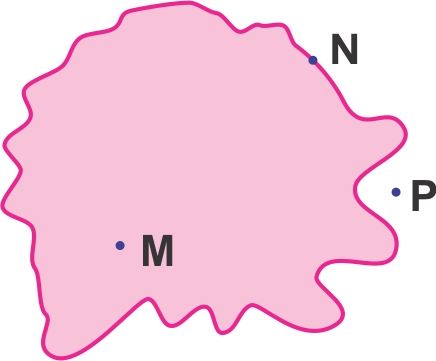 A closed curve formed by the line segments is called a polygon if:

Sides, Vertices and Diagonals of a Polygon

The line segments forming a polygon are called its sides.

The end-points of the line segments are called its vertices. In other words, the meeting point of a pair of sides is called a vertex of the polygon.

The line segments obtained by joining the vertices which are not adjacent are called the diagonals of the polygon.

Note: The end-points of the same side of a polygon are known as adjacent vertices.

ABC is a polygon having three sides AB, BC and CA. Points A, B, C are called vertices.
The figure consists of three sides. So, it is called a triangle.

What do you mean by curve? give some examples

A curve is a shape or a line which is smoothly drawn in a plane having a bent or turns in it. For example, a circle, parabola, hyperbola or a zig-zag shape are examples of curved-shape.

How are polygons used in real life?

What characteristics do polygons have?

A five-sided shape is called a pentagon. A six-sided shape is a hexagon, a seven-sided shape a heptagon, while an octagon has eight sides… The names of polygons are derived from the prefixes of ancient Greek numbers.

The polygon with four sides PQ, QR, RS and SP. It has four vertices P, Q, R and S. Such a figure is called a quadrilateral. Line segments PR and SQ are known as the diagonals.
A closed figure formed by five line segments is known as a pentagon. A pentagon with KL, LM, MN, NP and PK as five sides. K, L, M, N and P are five vertices of the pentagon. Line segments KM, KN, LN, LP etc. are diagonals.

How many sums are there in exercise 4.6 of class 6th Maths?

In exercise 4.6 of class 6th Maths, there are four questions and no example. From this exercise, short answer type questions like true or false, yes or no, MCQ, fill in the blanks, one-word answers will come in the exam. Basically, 1 mark or 2 marks questions will come from this exercise.

Which questions of exercise 4.6 of class 6 Maths are important and may come in the exam?

There are four questions in exercise 4.6 of class 6 Maths. All questions of this exercise are important for the exam. But the most important questions that have more chance to come in the exams are questions 2 and 3.

Can students complete exercise 4.6 of class 6th Maths within 2 hours?

What will students study in exercise 4.6 of class 6th Maths?

In exercise 4.6 of class 6th Maths, students will study all about circles. Students will enjoy doing this exercise.