NCERT Solutions for Class 8 Science Chapter 12 Friction in Hindi and English Medium (Adhyay 12: Gharshan) to Study online or download in PDF or View in Video Format free for session 2022-23 updated according to new CBSE Syllabus based on new NCERT Books. CBSE Books Solutions 2022-2023 as well as NCERT Books and CBSE Offline Apps of other subjects are also available. Visit to Discussion Forum to ask your doubts and to discussion the questions asked by other students.

NCERT Solutions for Class 8 Science Chapter 12 Friction is given below. Video Format solution and offline apps based on latest NCERT Books 2022-23 are also available. Download 8 Science App for offline use.

Explain why objects moving in fluids must have special shapes.

Explain why the sliding friction is less than the static friction.

Give examples to show that friction is both a friend and a foe.

Friction is both a friend and a foe due to following reasons:

Friction act as foe:
Wear and tear of soles of our shoes is due to friction.
When a tyre deflates, it is difficult to move the vehicle because of increased friction between the tyre and road surface.
Machines gets heated up because of friction.
Due to friction, machines and vehicles consumes more fuel and increase maintenance cost.

Explain why sportsmen use shoes with spikes.

Spikes increase friction and give better grip with the ground. It avoids slipping of sportsmen while playing or running.

1. Whenever the surfaces in contact tend to move or move with respect to each other, the force of friction comes into play
(a) only if the objects are solid.
(b) only if one of the two objects is liquid.
(c) only if one of the two objects is gaseous.
(d) irrespective of whether the objects are solid, liquid or gaseous.
2. To sharpen the blade of a knife by rubbing it against a surface, which of the following will be most suitable?
(a) stone
(b) plastic block
(c) wooden block
(d) glass block
3. In a large commercial complex there are four ways to reach the main road. One of the path has loose soil, the second is laid with polished marble, the third is laid with bricks and the fourth has gravel surface. It is raining heavily and Paheli wishes to reach the main road. The path on which she is least likely to slip is
(a) loose soil.
(b) polished marble.
(c) bricks.
(d) gravel.
4. A toy car released with the same initial speed will travel farthest on
(a) muddy surface
(b) polished marble surface
(c) cemented surface
(d) brick surface
5. Which of the following statements is incorrect?
(a) Friction acts on a ball rolling along the ground.
(b) Friction acts on a boat moving on water.
(c) Friction acts on a bicycle moving on a smooth road.
(d) Friction does not act on a ball moving through air.
6. If we apply oil on door hinges, the friction will
(a) increase
(b) decrease
(c) disappear altogether
(d) will remain unchanged
7. A boy rolls a rubber ball on a wooden surface. The ball travels a short distance before coming to rest. To make the same ball travel longer distance before coming to rest, he may
(a) spread a carpet on the wooden surface.
(b) cover the ball with a piece of cloth.
(c) sprinkle talcum powder on the wooden surface.
(d) sprinkle sand on the wooden surface.
8. Two boys are riding their bicycles on the same concrete road. One has new tyres on his bicycle while the other has tyres that are old and used. Which of them is more likely to skid while moving through a patch of the road which has lubricating oil spilled over it?
9. Imagine that an object is falling through a long straight glass tube held vertical; air has been removed completely from the tube. The object does not touch the walls of the tube. Will the object experience any force of friction?
10. Explain why the surface of mortar and pestle (silbatta) used for grinding is etched again after prolonged use?

Ask your doubts related to NIOS or CBSE Board and share your knowledge with your friends and other users through Discussion Forum. Download CBSE NCERT Books and Apps for offline use. 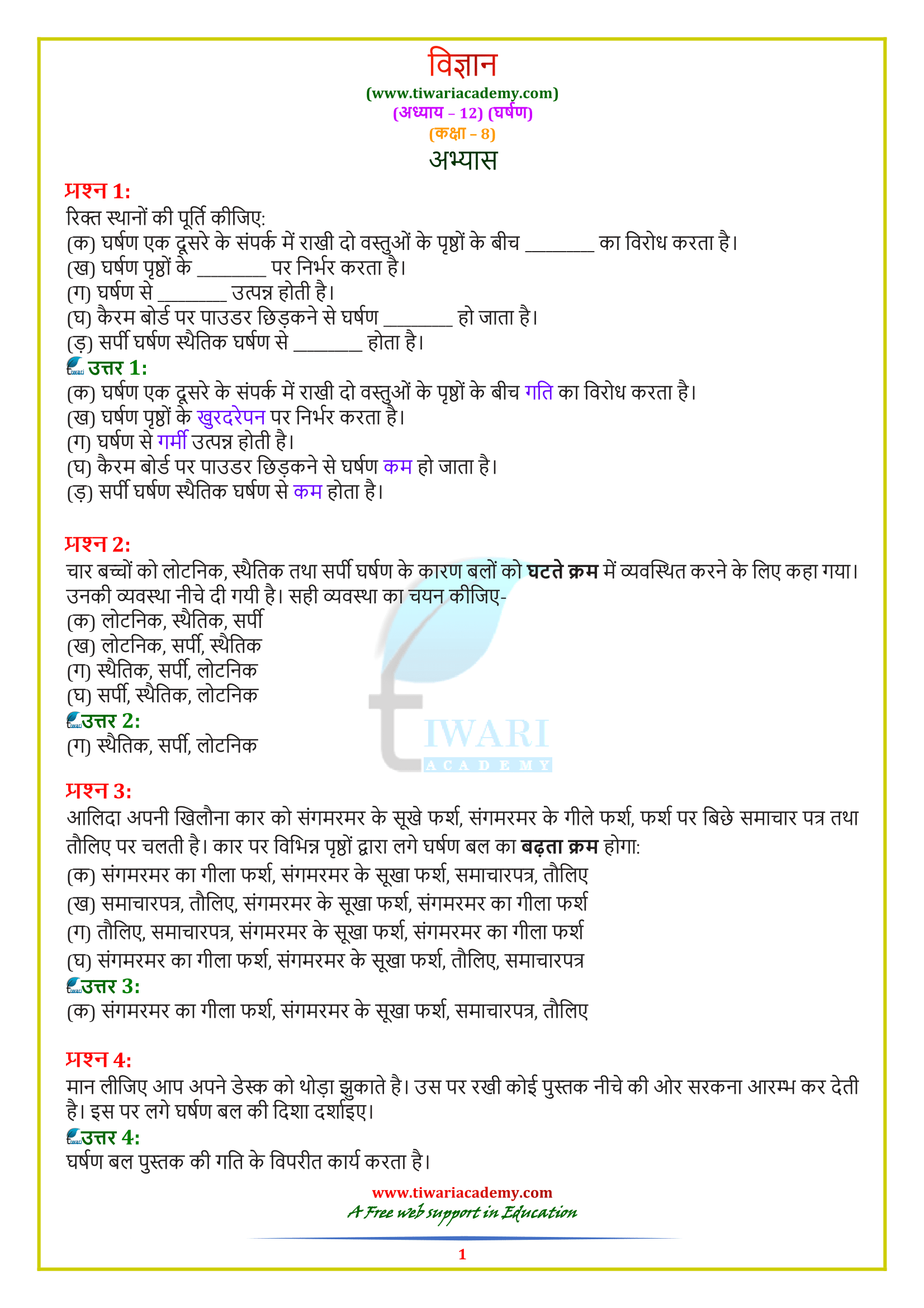